I’ve dedicated this page to all the graphics I’ve used with the books.  Some I’ve found.  Some I’ve even created myself.  Recently, though, as many of you know from Lost City, a good friend of mine in England, Mr. Brett Gable, has taken on the role of unofficial illustrator.  He’s drawn the QM and the Narian Power Hammer, used in Lost City.  He’s also provided a very cool illustration of a dragon egg, which is used in SWtwC.  How he does it I’ll never know.  I’ll stick to writing.  🙂 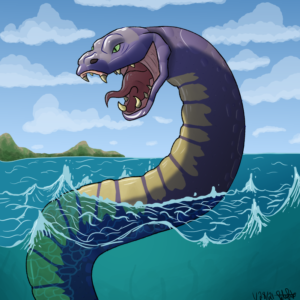 My nephew, Blayke, a multi-talented young man who loves to draw, expressed interest in drawing something for me.  I told him I’d like to see if he could draw an oskorlisk, namely one of the giant serpents which plague the Sea of Koralis.

He did a great job, didn’t he?  I was also shocked to discover he has his own YouTube channel! 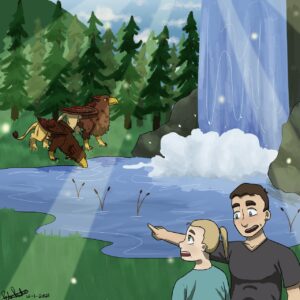 From The Prophecy (Bakkian Chronicles #1), comes the exact moment Steve and Sarah realize they aren’t on their home world anymore!