Long believed to be uninhabited, the peaceful residents of Lentari are shocked to learn they have been visited by travelers from across the Great Sea. Unfortunately, they’re pirates! 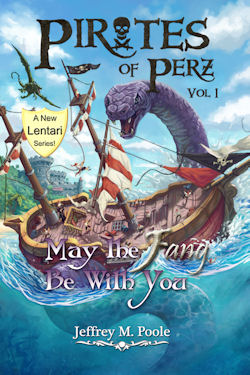 May the Fang Be With You (PoP #1) – The land across the Great Sea is long believed to be uninhabited. However, the people of Lentari are shocked to learn that not only are they gravely mistaken, but their first visitors have sinister intentions in mind. They’re pirates! To make matters worse, what they’re searching for has the power to topple kingdoms! 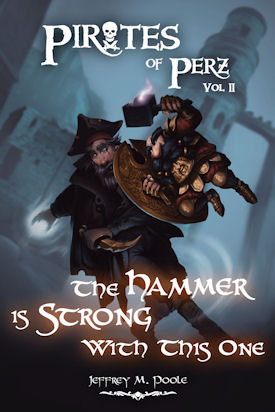 The Hammer is Strong With This One (PoP #2) – Volume 2 of the epic fantasy adventure series, Pirates of Perz!

The Pirates of Perz are at it again! The action has now gone below ground, to the realm of the dwarves, as the pirates rush to find the Narian Power Hammer. Hot on their tail are husband and wife team Steve and Sarah, and wizard acolyte Gareth. Together, the three companions hurry to the subterranean realm of the dwarves to prepare for the impending confrontation!

These are Not the Stones You’re Looking For (PoP #3) – Volume 3 of the Pirates of Perz trilogy! Will Captain Flinn and the pirates manage to find the Archos Stone before the Lentarians? Will Steve and Sarah be able to stop the marauding pirates once and for all?

The plot for the final volume is being kept secret. For now. 🙂 Coming soon!!


Welcome to Pomme Valley!  Tag along with two adorable corgis – Sherlock and Watson – and their reluctant owner, Zack, as they solve all manner of crimes in picturesque southwestern Oregon.

Case of the One-Eyed Tiger (CCF #1) – When a shocking murder shatters the tranquility of a sleepy Oregon town, and a priceless sculpture turns up missing, all fingers soon start pointing at new resident Zachary Anderson.

Armed with a determination to clear his name, Zack sets out to solve the case with the help of a feisty canine companion with an uncanny ability to sniff out clues.  With evidence mounting against him, can Zack identify the killer and locate the missing sculpture before he ends up in the doghouse?

Case of the Fleet-Footed Mummy (CCF #2) – When a traveling Egyptian exhibit stops in picturesque Pomme Valley, all hell breaks loose after a valuable artifact is stolen and a dead body turns up in an unexpected location.  The prime suspect has already been identified but there’s a catch:  he’s over 3,000 years old.

Pomme Valley’s newest crime fighting crusaders are on the case with Sherlock, new pack mate Watson, and their skeptical human, Zack.  Can they solve the murder and locate the missing loot before any more misfortune can befall the town?

Case of the Holiday Hijinks (CCF #3) –  There’s a Grinch in Pomme Valley!  Someone is stealing presents right from under the noses of unsuspecting home owners and leaving no trace of how they broke in.  And, to make matters even more baffling, only presents are being stolen.

Corgis Sherlock & Watson are on the case!  Accompanied by Zack, their reluctant human, the unlikely trio must find out who’s responsible for the thefts and put a stop to it before anyone gets hurt.

Case of the Pilfered Pooches (CCF #4) – A rash of missing dogs prompts the official hiring of Zachary Anderson by the Pomme Valley PD as an investigative consultant who will – along with canine companions Sherlock & Watson – look into the matter.

Zack and the corgis race against time to identify the dognapper and return the stolen dogs before the irate townsfolk take matters into their own hands.

Case of the Muffin Murders (CCF #5) – A string of baffling incidents have befallen Taylor Adams, baker extraordinaire of Pomme Valley. When good friend Jillian Cooper recommends Zack and the corgis investigate, Taylor’s run of bad luck worsens as multiple murders are discovered and all evidence suggests the town’s baker is to blame.

Can Zack and the dogs clear Taylor’s good name before someone he cares about becomes the next victim?

Case of the Chatty Roadrunner (CCF #6) – Zack and his two corgis take on their most difficult case yet: to learn what happened to Zack’s late wife, Samantha. Was it a car accident, as everyone had originally believed? Could it be murder, as suggested by a mystery caller in the middle of the night?

Accompanied by his new girlfriend, Jillian Cooper, and good friend detective Vance Samuelson, Zack begins his investigation in his hometown of Phoenix, only to learn that what they uncover could simply be the largest coverup anyone has ever seen.

Case of the Highland House Haunting (CCF #7) – When Jillian decides to purchase one of Pomme Valley’s historic houses to turn into a bed & breakfast, little does she know that her newest investment might very well come with its own ghost!

Zack brings in Sherlock and Watson, who immediately discover that all is not as it appears at the mysterious Highland House!

Case of the Ostentatious Otters (Corgi Case Files #8) – When a dead SCUBA diver is discovered during their road trip vacation to Monterey, Zack, Jillian and the dogs, investigate the circumstances of the death. When otters appear and use what looks like bits of treasure as tools for opening shellfish, Zack wonders if the events are related. Is a sunken treasure ship nearby?

Pick up your copy today of Zack and the dogs’ latest thrilling adventure!

The Kingdom of Lentari lives on!  Dwarves, dragons, and everyone’s favorite husband and wife duo are back for even more good times in the magical land of Lentari!

Lost City (ToL #1) – When a young dwarf child is accidentally chosen to undergo a challenging quest, three warriors – and a scholar – join together to help track down a long lost piece of dwarven history.

Coming face-to-face with the rarest wildlife Lentari has to offer, soaring high through the clouds in the clutches of the dragons, and trying to solve the most cryptic scavenger hunt anyone has ever seen, five dwarves are led on a quest to solve a mystery that has confounded their fellow dwarves for centuries.

Something Wyverian This Way Comes (ToL #2) – Pryllan wishes she could bask in new motherhood, but disaster looms: a plague is attacking dragonkind.

The normally indomitable Wyverian population is in danger. Even the wrath of the (bite first; ask second) Dragon Lord will not deter her in her quest to contact a certain husband and wife team.

Together they go in search of answers they may not want to find.

A Portal for Your Thoughts (ToL #3) – The discovery of a mysterious anomaly on the western Lentari shore has the Royal family reeling, a town riled and people missing.

If anyone is to mount a rescue, without knowing what they are dealing with, then contacting the Nohrin would seem to be the best bet, but as both Nohrin become victims of the anomaly’s ability to move in time and space, they must find a way to stay alive, find the missing townsfolk and return to their own time.

Thoughts for a Portal (ToL #4) – The adventures continue!  We last saw Steve desperately trying to figure out how to get back to Idaho without the use of a portal.

Stuck in a time that isn’t his, Steve struggles to fight extinct monsters, rescue missing villagers, and somehow protect his ancestors so that he isn’t erased from existence all while trying to determine how to get home.

And you thought you’ve had a bad week.

Wizard in the Woods (ToL #5) – Mikal, the Lentarian crown prince, has recently celebrated his 18th birthday. Growing restless under his parents’ constant watch, Mikal asks his father for something worthwhile to do; something with responsibility.

Already struggling to solve an ever worsening situation that’s affecting the entire kingdom, the king sees an opportunity for his son to help alleviate his growing burden of concerns. Kri’Entu quickly assigns Mikal his first official mission:  a certain renegade wizard has resurfaced and has been creating mayhem all across the kingdom.

Mikal is tasked with unmasking the fiend once and for all and bringing him to justice.

Close Encounters of the Magical Kind (ToL #6) – Steve and Sarah Miller have protected royalty, fought foreign invaders, and defeated evil sorceresses. Respected by the Lentarian King and Queen, they both possess magical powers that would make a wizard turn green with envy. Now, however, all Steve and Sarah want to do is take a nice, quiet vacation together.

It wasn’t meant to be.  When Sarah receives a distress call she can’t refuse, from a species she never knew lived in Lentari, she soon realizes more is at stake than a simple plea for help. In order to prevent a catastrophe from happening, husband and wife must locate something no one has heard of, journey to a land where no human has ever tread, and procure something no one can seem to find, all within a dangerously short amount of time.

The Hunt for Red Oskorlisk (ToL short story) – A wager has been cast.  Are there advantages for dragons carrying riders?  Do two minds work better than one?  That’s the question Steve and Pryllan set out to answer as they are tested at the Hunt, an annual ceremony where only the gifted and most skilled wyverians seek out the oskorlisk, the great serpent of the eastern sea.  Can dragon and rider find one of these serpents and get their trophy before anyone else?   Will they be able to pave the way for the return of the dragon riders?

This 8,400+ word adventure story addresses one of the oldest questions out there:  are two better than one?


The series that started it all!  Follow the exploits of a husband and wife team who discover a magical portal inside their newly inherited house.

The Prophecy (BC #1) – Griffins, Dragons, and BNPs (Bugs of Nightmarish Proportions).  Who knew?  It seemed harmless enough. See a mysterious door and step through to see what happens.

Now stranded in a magical kingdom, husband and wife search for a way home.  However, enlisting the aid of the king and queen has given them their biggest shock yet: Royal Babysitters.   Some days it didn’t pay to get out of bed.

This is the start of the trilogy and is free!  Give it a try!  Available at most online retailers!

Insurrection (BC #2) – Add one magic-stealing goblet, half a dozen dimwitted trolls, and one conceited wizard.  Next add one kidnapped member of the royal family, one concerned son, two bodyguards, a soldier, and an adolescent griffin.  Throw in a pinch of green dragon.  Mix well and you will have yourself one fantastic action-packed fantasy adventure set in the magical kingdom of Lentari!

Amulet of Aria (BC #3) – Mikal is not safe.  The sorceress Celestia has found a way to attack the prince on his bodyguards’ world.  Realizing this, Steve and Sarah escort Mikal back to Lentari to inform his parents. However, they are shocked to discover Lentari is in turmoil.  Dwarves are preparing for war.  Dragon raids are on the rise.  To keep Mikal out of Celestia’s grasp a powerful amulet must be found.

Don’t miss the final installment of the Bakkian Chronicles!

Follow the gang as they try to take a vacation at the happiest place on Earth in The Disneyland Debacle.   5,000+ words

See what happens when Mikal’s parents come for their first ever visit to the “Kingdom of Idaho” in Winter Wonderland   7,200+ words

These stories are sure to put a smile on your face!