As the title implies, I hope to have not one but two releases for you by the end of this month.  The next installment in the Tales of Lentari series, Close Encounters of the Magical Kind, is finished and is in the hands of my primary proofer.  As soon as she’s done then it’ll be released to the members of the Posse and they’ll go through it with a fine tooth comb.  Then it’ll be released.

The 2nd title is still being worked on but I have faith that I’ll be able to get it released by the end of the month.  Yep, I thought that a book entitled Case of the Fleet-Footed Mummy and Halloween would go hand in hand.  So right now I’m busting tail, trying to get that book done, too.

Here’s a preview of the new mystery cover, complete with two corgis on the cover.  🙂 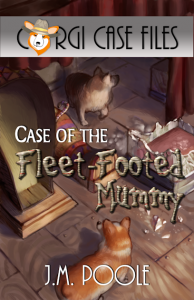 Case of the Fleet-Footed Mummy

I’m trying to schedule some promotions for the first mystery novel and time it with the release of the 2nd, so wish me luck!

I’m also heading off for a bit of vacation here in a few days.  Will be back by the end of next week.  My plan is to get ToL6 out to the Posse before I leave.  Fingers crossed, people!!