I hope everyone is having a great summer thus far.  As many of you will recall, I’ve stated for the record – numerous times – that I’m not fan of the Arizona summer.  What do you expect?  It can easily hit 120+ during the day and only drop to the mid 90s at night.  Oh, we mustn’t forget to factor in the fantastic monsoon seasons which plague the desert.  Just a few days ago it looked (& felt) like a horizontal tornado touched down outside.  Houses sustained roof damage.  Trees were knocked over.  Hell, even mailboxes were blown into the street.

Be that as it may, I wanted to give you guys an update.  As you can probably see from yesterday’s protected post, my latest fantasy novel is in the hands of my Posse.  By now, I’m sure they’ve ripped it to shreds.  Oh, well.  I’ll take whatever help I can get, guys.  And for those of you that know me, I really could use the help! 🙂   May the Fang Be With You (Pirates of Perz #1) is slated to be released at the end of the month.  I’ve got the preorder in place for Barnes & Noble, Kobo, Apple, and so on.  Amazon is a little easier.  I can upload the files directly to them and have the book ready for purchase in probably less than four hours.

Case of the Pilfered Pooches (Corgi Case Files #4) should be finished by the end of the month, too.  That should (knocking on wood) mean that it’ll get a mid August release.  Then it’ll be back to Lentari for me as the second novel of the Pirates of Perz series will be at the plate.

Also, I have a Goodreads Giveaway going for Case of the Fleet-Footed Mummy (Corgi Case Files #2).  If you haven’t already, jet over there to check it out and sign up!   I’d also like to tell everyone that Smashwords is having a month-long sale for those authors who have enrolled their books.  Well, I’ve enrolled mine, which means the 9 books I’ve published that has a price tag on it will have dropped in price by 50%.  If there’s a title or two you haven’t picked up yet, and have been waiting for the most opportune time to finish your library, now’s the time.  Use the “Smashwords” link on the right side, under “Retailers”.  The coupon code is “SSW50”.

I’d also like to reveal the covers for my next two books.  You might have noticed the tiny thumbnails on the right of the blog, under “Works in Progress”.  Here they are, in better resolution: 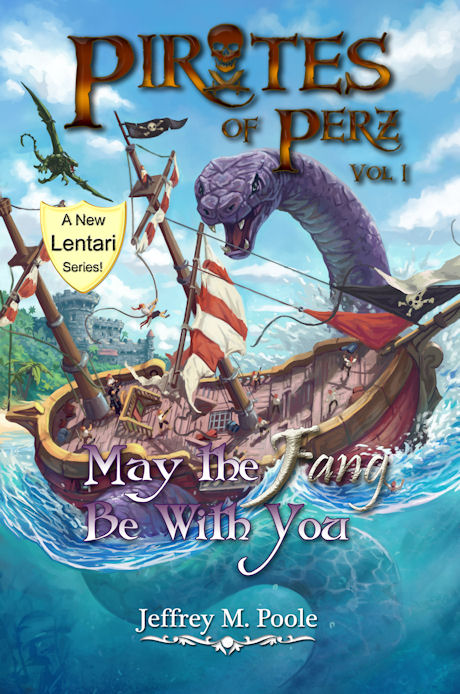 Joe Shawcross, the same gentleman who drew the Close Encounters of the Magical Kind cover, kindly took on the commission to create this one.  Once more, I think Joe did a fantastic job.  I told him I needed an oskorlisk attacking a pirate ship, with a green dragon in the air and – if possible – a castle in the background.

Then we have the cover for my next mystery novel.  This one is a tribute to my family’s dogs.  My father has three chocolate labs.  You’ll see two of them in the background, playing with a rope.  My mother has the two cocker spaniels, and of course, I have the red & white corgi.  I thought it was a novel way to get everyone’s dogs on the cover of a book.  An artist by the name of Felipe, living in Brazil, is responsible for this cover.  He also illustrated #2 and #3 as well.  Felipe, you’re doing a helluva job!

I think that’s it for now.  I hope everyone is in the mood to read!  I’m gonna be having two releases fairly close to each other.  I hope my fantasy fans will give the mystery a try, and I hope the mystery fans will pick up one of my fantasies and give it a try.  But, even if they don’t, I am damn proud to be writing books that you’re enjoying.  Feel free to look me up on Facebook to say hello!  I’ll always take the time to answer any messages that come my way!