I’m pleased to announce that I have not one, but two audiobooks being produced at the same time!  Lost City (Tales of Lentari #1) is predicted to be just over 11 hours long, and Case of the One-Eyed Tiger (Corgi Case Files #1) is predicted to be a little over 7 hours.  I’ve already listened to the first 15 minutes from CCF1, and I think you guys are really gonna like it!  The first 15 minutes from ToL1 is due in a week or so.  Can’t wait to hear that preview, too!

I also wanted to announce that the pre-order for Case of the Muffin Murders (Corgi Case Files #5) is already in place at Barnes & Noble, Apple, Kobo, etc.  Unfortunately, it’s not at Amazon yet, but since I can get a title uploaded and listed within 12 hours, I’m not too concerned.  The other retailers are hit and miss when trying to get an exact date to have the book appear.  So, a pre-order was necessary.

In the fantasy department, work progresses on the second Pirates of Perz story.  The Hammer is Strong With This One will see our unruly band of pirates face off against the dwarves, as ol’ Captain Flinn is determined to get his hands on one powerful hammer.  For those of you familiar with my Tales of Lentari series, you’ll know which hammer I’m talking about.  Care to see a preview of the new cover?  Check it out!  Courtesy of Alexandru Stoica, the Romanian artist who is currently working on a graphic novel version of Lost City. 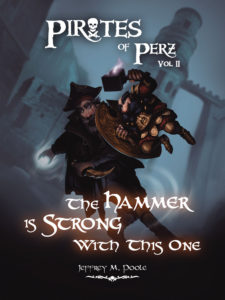 In other news, I have made the transition from Lake Havasu City to Phoenix.  My wife has essentially been relocated to the big city for nearly two years, and this was much easier on her.  I can essentially write from anywhere, especially where there’s an Internet connection, so voila!  Here I am!  Livin’ the good life in one big-ass city!

That’s it for now.  Gotta get back to Lentari!  Those damn pesky pirates are becoming quite the nuisance for the dwarves.