There are some among you, the eagle-eyed fans, who have noticed that I had quietly absorbed my “Pirates of Perz” trilogy into my “Tales of Lentari” series. Why? Well, the easiest explanation is that not that many fans/readers knew it was part of the Lentari series. No matter how many descriptions and “Author Notes” I put in the blurb, this series never caught on that well. So, I decided to rebrand the series, redo the cover, and add the yellow scroll known for being on the Tales of Lentari series. Plus, I added a small black flag just below the scroll, which displays the “Pirates of Perz #”. Fingers crossed that it will help readers find more stories with their favorite characters!

The end of the month is rapidly approaching. I have the 10th novel in my Corgi Case Files series set to be released then. Case of the Abandoned Bones. Zack is gonna find more human remains on his property, and once more, he’ll find himself on the other side of the table during a police investigation. Will Sherlock and Watson be able to point everyone in the right direction?

It’s up for pre-orders, so if you haven’t already, reserve yourself a copy today!

At the moment, I’m hard at work on the new Dragons of Andela series. I’m hoping to have it finished by next month. Then, of course, it’ll be back to Pomme Valley for a spell.

Busy, busy, busy. But, as you guys may have noticed, most people are stuck at home, without much else to do. Why not be productive at the same time? Speaking of being productive, I’m also pleased to announce my audiobook narrator is hard at work on CCF7. Case of the Highland House Haunting was an absolute blast to write. Can’t wait to hear it in audiobook form!

That’s it for now. Stay safe out there, people, and don’t forget to mask up!! 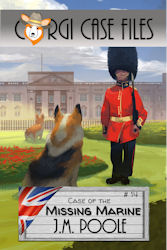