Hello! One of my books, Case of the One-Eyed Tiger, has been included in a collection of mysteries that are going to be made free to the public. Essentially, the more authors you follow on Bookbub, the better the chances are that you’ll win copies of books. So, if you haven’t already, come follow me on Bookbub! Check out some of the other authors that are participating! It’s a fantastic way to grab some free books! Click the image above or here to check it out!

In celebration of having my latest CCF title getting its own audiobook, I’m creating a contest to give away promo codes! If you’re interested in trying to win yourself a free audiobook, and are prepared to leave a review once you do, then leave a comment and, on March 5th, 2021, I’ll announce ten lucky winners! Leave a comment below, and don’t forget to give me a way to contact you in case you win!

Now available for pre-order!  Case of the Shady Shamrock (Corgi Case Files #12) will be out in time for St. Patty’s Day, so be sure to reserve your copy today!

A mysterious package appears on Zack Anderson’s doorstep. When he opens the crate, there’s an elaborate silver chest, obviously quite old, with Celtic markings and no apparent way to open it. Zack is almost content to accept the artifact as a decorative item … until people start coming after it. The only conclusion is that the box contains something of great value. Zack, Jillian, Sherlock, and Watson are on the case, tracking down the unusual item, learning tidbits about the box’s history, and discovering that it dates back to an unsolved theft in Ireland more than a hundred years ago.

Case of the Abandoned Bones (Corgi Case Files #10) has been officially released! If you have already pre-ordered the title, you have my thanks, and by the time you open your electronic device, the book should already be waiting for you. For those of you who’d like to check it out, I’ve included some easy links in order to make things easier.

For the rest of you, especially the fans of my fantasy stories, I can tell you that progress is coming along nicely for Harness the Fire (Dragons of Andela #1). I hope to have it finished by the end of September, with a release date at the end of October. Keep your fingers crossed!

Keep an eye on the blog here. I think it’s time to do a couple of giveaways. Up for grabs will be some print copies of your favorite stories, be it mystery or fantasy! I just gotta think of something to make you guys do. 🙂

Stay safe out there! Happy reading!

I hope everyone had a great summer! As for me, it was a blast, only the weather here in Arizona is still incredibly warm. Summer just doesn’t wanna let go of us.

I went to put one of my paperbacks up for a giveaway on Goodreads, which I’ve done countless times, only they are now asking an outrageous amount to do it. Me, being the cheapskate that I am, refused, so no more Goodreads giveaways for me. Therefore, I’ll host my own giveaway, here on my blog. So, if you’re interested in getting a free paperback copy of any of the books that I have currently released, make sure you’re signed up for the newsletter AND leave a comment below (specify which title you’d like). I’ll choose a name at random and, regardless where you’re at, I’ll send the book to you.

Good luck to all who enter!

Well, it took wayyyy longer than I had hoped, but the first novel in my new Pirates of Perz series has been finished.  I’m giving it to my primary proofer (my wife!) as soon as she returns from her business trip.  Once she goes through it, it’ll then be given to my Posse.

There you have it.  That’s the crew of the Emberbrand.  Quite possibly the most notorious pirate ship of the Seven Kingdoms.  If only they would have stayed retired, then they would have stayed out of trouble.  As it is, they’re looking for an all-powerful stone.  Guess where they think it is?  Yep!  In everyone’s favorite magical kingdom… Lentari!

Now, with that out of the way, guess what?  It’s time to return to Pomme Valley for a spell.  A rash of dognappings has been happening, and its up to Sherlock and Watson to figure out who is responsible, and poor Zack to decipher the clues he’s been given!  As always, it’s chock full of humor, corgi antics, and colorful relatable characters living in a small southwestern Oregon town.  I’ll keep you posted on its progress!

Anyone see any good movies lately?  My wife and I saw Guardians of the Galaxy, Vol. 2 last week.   Well, did we like it?  Hmm.  I do think there was more humor and more fun in the first.  I’m not really sure what the point was to the second movie, nor how it was supposed to fit into the Marvel “master plan” they are always touting.  I guess time will tell.  The first Guardians got a solid A.  The second Guardians gets a B-.  Maybe you guys liked it a little bit better.

Starting tomorrow, there’s a new Goodreads giveaway happening for one of the mystery novels.   Case of the Fleet-Footed Mummy (Corgi Case Files #2) is up for grabs for residents of the US, UK, Canada, Ireland, Germany, France, Spain, Sweden, and Australia.  I think that’s all of them.  Anyway, the giveaway goes live at midnight tonight!  It’ll run from the first of June all the way through the end of July.  Good luck!  I hope everyone enters!

Case of the Fleet-Footed Mummy

I think that’s it for now.  Stay tuned!  I will be posting the completed cover for Pirates of Perz #1 shortly!

Hey, everyone!  I hope everyone is enjoying the new year thus far.  Any significant plans?  As for me, I’m stepping up my schedule.  I’m going to try and  – get this – write my fantasy novels in 2 months and the mysteries in 1.  If I can keep to that schedule then that means I’ll be able to release 8 books in a single year.  Think I can do it?

The first novel of the year will be the beginning to a new trilogy, Pirates of Perz.  The main story will span 3 books and involves a band of pirates who are bent on stealing magical artifacts to further their own gains.  And yes, I’ve already started.  🙂

I also have the titles of the next four Corgi Case Files.  I’ll give you a teaser.  The first mystery of the year, due to be written in March, will be entitled Case of the Pilfered Pooch.  So, to start this year off, I’m holding a giveaway for one of the mystery books.  Which one?  Well, whichever the winner would like.  Would you like to enter?  There’s only one prereq.  A review.  Comment below and leave me a link to the review you’ve written (for one of the mystery books) and you’re entered!  I’ll have Keeley pick a winner at the end of the month.  And, for the record, it doesn’t matter where you’re at.  This contest is open to everyone, regardless where they live.  And has left a review for one of the mysteries.

If there’s only one person who enters, well, then that person is going to get a signed print copy of any of the three mysteries.  Good luck to all who enter!

My bad for flat-out forgetting to post about this once this went active.  I have a new giveaway!  It’s presently at GoodReads and is open to US residents only.  I know, I know.  I should open it to more countries.  Tell you what.  If I see a lot of people entering the giveaway then my next giveaway will include more countries!

Case of the One-Eyed Tiger

Back when I started writing I never imagined that I’d write/release/publish a mystery novel. I just figured I’d always stick to fantasy. Had I checked around then I would have seen that all the other authors were using their names as their main websites. After I published CCF1 I realized a change was in order. Lentari really doesn’t have anything to do with the new mystery novel so I had to come up with another name. And, wouldn’t you know it, JMPoole.com was already taken. So that’s how AuthorJMPoole.com came to be.

Now, in case you didn’t know, this website is a WordPress site. There are a few things you should know about WordPress. It really doesn’t like you messing with its innards. I thought for certain I screwed up the site on my first attempt to switch it to the new domain. Thank the Fates that Godaddy keeps 30 day backups. 🙂

I did my research for my 2nd attempt. Looked up notes from people who had already done it, printed out instructions, etc. It took a while but I got it moved! Now I can have a suitable presence online for readers of all the books. Works in progress, upcoming events, giveaways, etc. I’ll cover all the bases from this one website.

I’m also announcing that just as soon as my (2nd) printed proof arrives I’ll be hosting some giveaways. I’ll give away copies of CCF1 on Goodreads and on here. I’ve always been a fan of trivia. I’ll probably make you all strap on your thinking caps and answer a few questions. If you win, you’ll get a signed copy of the book!

I’m also toying with the idea of creating a section dedicated to PV and uploading some of the information I have in my binder. Maps, character profile sheets, business names, and so on. You wouldn’t believe the amount of info I have amassed as my wife and I plotted out the town. Thought it might be fun to share!

That’s it for now. Lentari is calling! ToL6 isn’t gonna write itself!

What better way to celebrate the upcoming holidays than by having a trivia contest!  AND, why not make the questions about the Star Wars universe since the new movie comes out on Friday!  So, let’s see how much useless Star Wars trivia is crammed away inside your head.  Hopefully it’s just as much as mine.

If there’s only one person who answers correctly then choosing the winner will be easy.  If there are multiple people who answer correctly then the winners will go into a hat and I’ll let Keeley the corgi choose.  What will you win?  A signed print copy of the latest Tales of Lentari book, Wizard in the Woods AND an automatic position as a Beta Reader for the 6th Tales of Lentari book as soon as I’m ready.  I also have a Goodreads Giveaway ending very soon, so I’ll ship both books out at the same time, which will be this coming Friday (the 18th).  Good luck!

They’ll start out easy and get progressively harder.

1. What’s the name of the creature Jabba the Hutt kept as a pet but was killed by Luke Skywalker during Han’s rescue in episode VI?

2. After Darth Maul’s demise in episode I, who did Darth Sidious take as an apprentice? What was his Sith name?

3. Where were the Pit of Sarlaac desert scenes filmed in real life?

4. How many actors have portrayed Anakin Skywalker/Darth Vader? Name them. 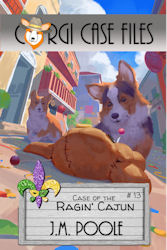