Just a quick note looking for guinea pigs. I’m trying to build up reviews for my new audiobooks, so if you’re willing to leave a review after you’re done listening (on Audible.com), then I can email you a promo code.

Interested?  Head over to my Facebook page and send me a private message. If you don’t have a FB account, then send me an email, using “jmpoole(at)gmail dot com”, and in exchange for a review, you can pick up one of my audiobooks for free!

I have two currently available, with a 3rd ready soon:

Promo codes will go fast, so if you’re interested, be sure to let me know ASAP!

To help celebrate the release of Case of the One-Eyed Tiger (Corgi Case Files #1) in audiobook form, I’m giving away a promotional code which will allow you to listen to the book for free!  The code only works at Audible.com, and you’ll need to have an account with them, but it won’t cost you a cent!

So, how do you enter?  Easy!  Answer the simple math question below and email me the answer:  jmpoole(at)gmail dot com. I will add comments with the name of each entrant who guesses correctly!  Good luck!

# of dogs stolen from PV in Pilfered Pooches    +

Good luck to all who enter!

I thought I’d let you know I’ve got two new titles available at Amazon. The first, available as a pre-order for the end of June, is for you fantasy lovers: The Hammer is Strong With This One (Pirates of Perz #2). It’s the second novel in the Pirates of Perz trilogy and continues on with the pirates venturing below ground to try to swipe a very special hammer from the dwarves.

For mystery fans, the latest excursion to beautiful Pomme Valley, Oregon, is now available at all major retailers: Case of the Muffin Murders (Corgi Case Files #5). Someone has targeted Taylor Adams, PV baker extraordinaire, and is trying to frame her for murder. Good friend Jillian Cooper asks Zack and the corgis to investigate!

Also in the land of PV, I am quite pleased to announce my very first audiobook, Case of the One-Eyed Tiger (Corgi Case Files #1), has been completed and will be available on Audible.com shortly! I’m also excited to tell you that my 2nd audiobook, Lost City (Tales of Lentari #1), is under production, and Case of the Fleet-Footed Mummy (Corgi Case Files #2), is about ready to go under production, too! I hope you all are able to check it out!

The Hammer is Strong With This One – Amazon, Amazon UK, Apple, Barnes & Noble, Kobo

I hope you’re having a fantastic spring! Happy reading!

I’m pleased to announce that I have not one, but two audiobooks being produced at the same time!  Lost City (Tales of Lentari #1) is predicted to be just over 11 hours long, and Case of the One-Eyed Tiger (Corgi Case Files #1) is predicted to be a little over 7 hours.  I’ve already listened to the first 15 minutes from CCF1, and I think you guys are really gonna like it!  The first 15 minutes from ToL1 is due in a week or so.  Can’t wait to hear that preview, too!

I also wanted to announce that the pre-order for Case of the Muffin Murders (Corgi Case Files #5) is already in place at Barnes & Noble, Apple, Kobo, etc.  Unfortunately, it’s not at Amazon yet, but since I can get a title uploaded and listed within 12 hours, I’m not too concerned.  The other retailers are hit and miss when trying to get an exact date to have the book appear.  So, a pre-order was necessary.

In the fantasy department, work progresses on the second Pirates of Perz story.  The Hammer is Strong With This One will see our unruly band of pirates face off against the dwarves, as ol’ Captain Flinn is determined to get his hands on one powerful hammer.  For those of you familiar with my Tales of Lentari series, you’ll know which hammer I’m talking about.  Care to see a preview of the new cover?  Check it out!  Courtesy of Alexandru Stoica, the Romanian artist who is currently working on a graphic novel version of Lost City.

In other news, I have made the transition from Lake Havasu City to Phoenix.  My wife has essentially been relocated to the big city for nearly two years, and this was much easier on her.  I can essentially write from anywhere, especially where there’s an Internet connection, so voila!  Here I am!  Livin’ the good life in one big-ass city!

That’s it for now.  Gotta get back to Lentari!  Those damn pesky pirates are becoming quite the nuisance for the dwarves. 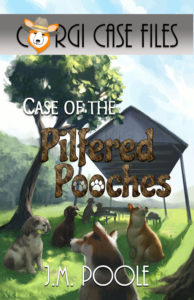 A super secret project, and I’m not even the one doing it.  🙂

Ok, in case you’re wondering just what I’m talking about, I was contacted by a fan in Romania and asked a very important question.  He’s an art student, and for his final school project, he would need to take a favorite novel and turn it into a comic book.  Or graphic novel, depending on the length.  Well, he has chosen Lost City (Tales of Lentari #1)!  He wanted to know if I’d give him permission to turn the story into a comic book.  He then sent me some samples of his work, one of which I have posted below.  Now, he tells me that it’ll take some time, probably in the neighborhood of 6 months, but he intends to tell the full story in comic book form.  Any guesses what answer I gave him?   🙂

Based on what I’ve seen thus far, I can’t wait to see the finished project!  I’m sure you guys will love it, too!  Now, in case you’re wondering, we haven’t really discussed plans on what will happen to the comic book once it’s finished.  However, I think we’d both like to see it published, so I’m sure we’ll be able to work something out.

Fingers crossed!  Oh, here’s one of the sample pages I was sent.  Pretty cool, huh? 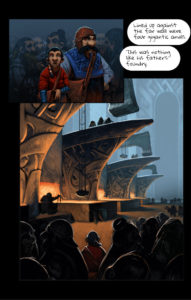 This particular scene is from the beginning of Lost City, where Venk and his son, Lukas, are attending a training seminar held by none other than Maelnar himself.

A few moments after this scene is where poor young Lukas acquires the mark on his back which will forever change his life.

Stay tuned!  I’ll be posting more sneak peeks not long after I get them!

First and foremost, my fourth mystery novel, Case of the Pilfered Pooches, has been completed.  It’s now in the hands of my primary proofer and soon to be given to my Posse so they can start breaking it down.  As for me, I’m already hard at work on the 2nd Pirates of Perz novel.  It’s time to see what those devious pirates are up to and figure out why they’re about to head underground to pay a visit to the dwarves.  🙂

Astute observers will notice a new page has been added to the blog.  It’s called ‘Promos’.  That page has the current listing of all places where you might be able to find a deal on one of my books.  There are entries from Smashwords (several of the titles are presently 50% off!) and a few from Instafreebie (several titles are currently free!).  If you’ve been holding off purchasing some titles, or else you need a few to complete your libraries, head over there to take a look.  You never know.  You might be able to pick up the next title in the series at a discounted rate.

I’ve also added a Fan Art section to my ‘Art’ page.  I recently commissioned one of my nephews for a drawing of an oskorlisk, since the giant serpent was featured in the first Pirates of Perz book.  Well, he delivered!  I would also like to encourage anyone else who might have more of an artistic background than myself to submit drawings of your favorite character/scene.  Not only will it be posted on my Art page, but I’ll also give you a free ebook of your choice (using Smashwords’ coupons).

That’s it for now.  It’s time to head back to Lentari to see what mischief Captain Flinn has gotten himself into this time.  Happy reading!