Ok, this next batch of questions could come from any of the 700+ movies on the bookshelves behind me.  So put on ye olde thinking caps!  Let’s see how good you people really are!

Question 1:
What was the name of Lt. John Dunbar’s love interest in the movie Dances With Wolves?

Question 2:
What is the name of the boat Lt. Cmdr Tom Dodge is given in Up Periscoope?

Question 3:
In the Hunt for Red October, what was the name of the nearly silent propulsion unit that allowed the Russian sub to run virtually undectable?

Get this one right and you’ll seriously impress me.  Here’s the uber-hard question:
How did Quigley respond for an advertisement for sharpshooters in Australia and why was Elliot Marston interested?   Extra credit:  how much was Quigley paid for just showing up?

Good luck to all!  Have a great weekend!

Ok, is there anyone out there who hasn’t seen the movies?  I think it’s safe to say that there are more than likely quite a few fans out there.  I count myself as one of ’em!   As with the other questions I’ve asked in the past, the first question is easy and then gets more difficult as we go!  Now, let’s see what kind of trivia questions we can come up with…

Good luck!  Remember, no Googling if you don’t know!

Extra credit…  Stump the author.  Ask a question I don’t know (based on the movies and not the books) and see if you can stump me!  Let all us nerds and geeks show our true colors!!!

This post comes to you from northern CA where my wife & I are spending a few days with her family.  Everyone got their thinking caps on?  Here’s the next round of trivia questions!

Good luck!  I hope everyone is having a great week!

TGIF, people!  Who’s looking forward to a fun  & relaxin’ weekend?  Anyone have any plans?  Gonna see any movies?  There are a few good ones out there that I wouldn’t mind seeing.  I’d love to see the new Transformers movie.  Now that Mr. Sourpuss, aka Shia whats-his-face isn’t it in, I might be tempted to see it!

Ready for the next round of trivia questions?  I’m going to use some Jim Cameron movies so put on ye olde thinking cap!  Ready?

Good luck, everyone!  I hope you all have a great weekend!

As I mentioned in a previous post, I’m starting up a trivia contest which will be hosted here on the blog.  What’s the contest for?  Signed paperback copies of my books.  Which books?  Well, that’ll vary depending on the quantity of each title I have on hand.  How does it work?   Read on!

I want to encourage people to play and participate, so the rules aren’t going to be too tough.  Simply put, I’m going to post some movie trivia questions several times a week. Active participants (who answer correctly!) will be automatically entered.   I’ll gather the names of those who are playing and write each name on a slip of paper.  It’ll then be presented to Keeley (AKA Peanut from the stories!) to see which name she chooses.  The winner will receive a signed print copy of whichever book I have the most copies of.  Scientific, huh?

Now, you may be curious as to why type of trivia will be asked.  It could be anything from who said the first spoken line in a movie to random bits of trivia I’ve heard over the years.   And let me tell you I’ve picked up quite a bit!  I have well over 700 titles to choose from and know quite a bit more about many others.  My specialty, of course, is the fantasy/sci-fi genre.

I’m a die-hard movie buff.  Feel free to fire back with your own trivia questions!  Ok, without further ado, let’s get on with the trivia!

Avast all ye lovers of useless bits of movie trivia!  Wilst thou be stumped upon reading mine questions?  Continue on if ye dare!

Today’s questions, from easy to hard so everyone can play!

Good luck!  I hope everyone is having a great weekend!  In case you’re wondering, I’m close to finalizing the rules for the movie trivia contest.    Stay tuned!!

I should let everyone know that I have a Goodreads giveaway ending on the end of the month.  A signed copy of Lost City (Tales of Lentari #1) is up for grabs and is open to residents of:  USA, Canada, UK, Ireland, France, Italy, Germany, Spain, and Australia.   If you haven’t entered for a chance to win, now’s the time!  Use the link below to get yourself entered at Goodreads!

Since I’m so very close to releasing Something Wyverian This Way Comes (Tales of Lentari #2), I’ve decided to start another drawing for a signed print copy once the book becomes available.  I’ve already held one drawing (congrats to Jenni!) so let’s see if we can give away another copy!

To be entered, all you have to do is Like SWtwC’s Facebook page and Like my Amazon Author’s page.  If you already have, great!  You have my thanks!   Once these things are done just leave me a message on this thread and you’re entered.  Be sure to leave a comment as this is where I’ll check to see who’s entered and will draw from those names.  That’s it!

Here are the links to use:  Facebook page , Amazon Author’s page

Hello all you honorary citizens of Lentari!  I’d like to announce the winner of last month’s Trivia Time Challenge.  And the winner?  Ms. Jenni Fuhrmann!  Congrats, Jenni!  If you’ll email me your mailing address I’ll put you down for one print copy of Something Wyverian This Way Comes just as soon as it is released!

I’d like to express my thanks to everyone who played!

Silly me!  I create a giveaway on Goodreads for someone to win a print copy of Lost City and I don’t even bother posting the link to it.  Whoops.  🙂

Now I realize that the answer to this question is easy enough to determine since everyone can just do a search on their e-readers, but I want to challenge the readers to see how many knows this without having to do so.  If you don’t know, that’s ok.  But do me a favor and let me know if you looked it up, ok?  And try not to look at what other people have written!  Let’s test those memory banks, people!!

Anyone who gets the answer is entered into the drawing!  The prize will be a print copy of Something Wyverian This Way Comes (Tales of Lentari #2) when it becomes available.  Unlike the Goodreads Giveaway, this contest is open to any fan regardless where you live.   This contest will end on the last day of February!

If you know the answer then leave a comment here and let me know!  Only people who comment here, with the correct answer, will be entered into the drawing!  Good luck to all who play! 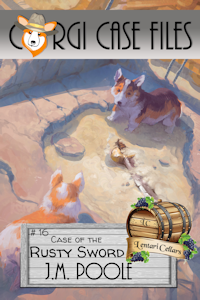